As communication styles change and social media becomes more and more an everyday part of life, society has adapted. Public relations professionals often see social media as a tool for reaching our publics, and though we all know there are negatives to social media can, I believe most professionals would agree it’s a positive thing. However, that isn’t always the case.

For many years graffiti was used as an outlet for gangs to mark their territory, but now they have moved to the Internet. Today, gangs use social media as a way to communicate with one another and plan organized crimes. In a study of five large cities, researchers found that social media is used by 80 percent of gang members (according to Solutions for State and Local Government Technologies). 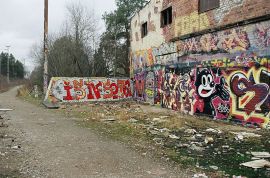 Not only can gangs send messages via social media, they can also post videos of their crimes, recruit others, and of course threaten other gangs. Today a gang can simply post what they want the public to know to social media. With the vast majority of cellphones having cameras, anyone can be a videographer, and in just a few clicks that video of a crime can be shared with the world.

In addition, gangs use the Internet and social media to monitor where police officers are; they warn each other as well and give each other the all-clear. Another trend gangs use on the West Coast is referred to as “flocking.” This is where a mass text is sent to gang members, telling them to show up at a specific place and conduct an organized crime, according to Government Technologies.

Gangs also send slanderous messages to other gangs via rap song through sites such as YouTube, Facebook, and Twitter. Last fall, videos posted to the web were what led to 18-year-old rapper Lil JoJo’s murder in Chicago, according to Government Technologies.

Public relations professionals usually see social media as a cost effective way to send out a message, and now gangs view it in the same regard. By one person, simply, sharing a status, video or image, it can quickly be seen by thousands.

According to a Daytona Beach Journal, gangs utilizing social media was seen just last week when five boys beat up a 14-year-old, filming the crime and posting it to Facebook. Luckily there was a light at the end of the tunnel for police. The video was used as police evidence and the four boys were arrested.

Though social media has become a tool for gang members, police believe it can help them execute their jobs properly as well. If officers know the ins and outs of how to utilize social media as a tool to catch gang members and criminals, more justice can be served. Unfortunately, officers fear they might not be able to prevent the crimes. For example, in the Florida case, officers were able to find those guilty of the crime because of the video, but they were unable to prevent the crime, itself. The hope is with the proper training, social media will become a more valuable tool for law enforcement than it is for gang members and criminals.

One thought on “Social Media: Not Always for Good”