Ah, newsjacking – the art of piggybacking off of the day’s biggest news stories and using it to turn attention toward yourself. This brilliant communications tactic is one public relations professionals should certainly take advantage of because, quite frankly, it works.

Some familiar faces participate in the ALS Ice Bucket Challenge

Marketer and author, Seth Godin, coined a term that I believe we should all be familiar with: Ideavirus. According to Godin, “an ideavirus is an idea that spreads through various networks like the Internet and grows rapidly within a target population.” The unique thing about an ideavirus is that it’s infectious. When an idea becomes infectious, it spreads and becomes bait for newsjacking.

Take, for example, the ALS Ice Bucket Challenge–an ideavirus through and through. It began with the efforts of a few Bostonians looking to make a change and soon erupted into one of the most viral trends to ever grace the Internet. The Challenge’s success was utterly remarkable, with countless individuals and brands taking part. In fact, because of this ideavirus, the ALS Association received an estimated total of $115 million in donations.

Trends that become viral are important to watch and can open the door for opportunity. How exactly can professionals take advantage of such opportunities, you ask? Newsjacking, my friends. I’ve done my research and to further illustrate the effectiveness of this tool, I now present to you my favorite examples of newsjacking: the good, the bad, and the ugly.

The Good: The Salvation Army gets creative.

The Salvation Army recently utilized the “brilliance that is newsjacking” by taking advantage of our super strange and utterly inexplicable obsession with “#thedress.” You know the one – the white and gold/black and blue one. Salvation Army made the brilliant decision to use this ridiculous obsession to bring awareness to something that actually matters – and it worked.

The Bad: AT&T gets tactless.

The anniversary of 9/11, what was quite possibly one of the darkest days in American history, is certainly something to be remembered. But did AT&T get it right? Nope.

Taking advantage of a very sensitive subject in order to drive sales probably isn’t the greatest idea. Unsurprisingly, the post received a lot of backlash from people who felt that AT&T was guilty of tactless newsjacking. The post was taken down, apologies were made, and the situation soon blew over.

The Ugly: DiGiorno, go stand in the corner and think about what you’ve done. 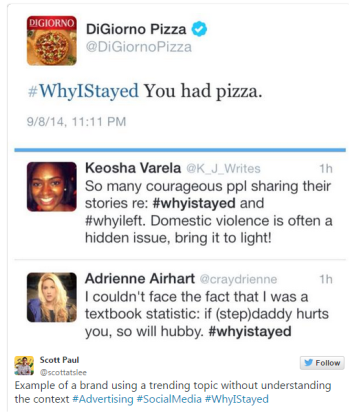 “Terrible newsjacking” is brought to you by DiGiorno Pizza in what is quite possibly one of the most infamous examples of newsjacking gone wrong.

When the hashtags “#WhyIStayed” and “#WhyILeft” were trending on Twitter, users shared their stories of abusive relationships.

Enter DiGiorno. The person in charge of its Twitter account no doubt saw these trending hashtags and, in utter ignorance to the actual meaning of the hashtags, decided to jump on the bandwagon with the lovely tweet you see to the right.

Rest assured, the tweet was deleted and apologies were made. I’m not sure whether DiGiorno’s social media manager lost their job, but a lesson was certainly learned: do your research, people.

These examples, along with the social media managers responsible for them, taught me three things about newsjacking.

A large part of what we do in the public relations industry is all about opportunity; keeping up with current news and trends, finding ways to get an organization in the press and creating positive publicity.

So what about newsjacking?

After the unforgettable and surprisingly successful engagement following Oreo’s Superbowl tweet, everyone and their brother have been trying to recreate the magic of “dunking in the dark.” From the infamous Suarez bite to Tim Howard saving everything to Brazil’s history-making defeat at the “feet” of Germany, companies were giving their best shot to take advantage and score big on Twitter during the World Cup. That’s what we call newsjacking.

Encore Alert, a company that sorts through brand tweets and identifies marketing opportunities, wanted to get to the bottom of it. The goal was to find out what works, what does not and why. An experiment was conducted with 18 companies of varying sizes with various numbers of followers. The research firm monitored the brands’ tweets during a timeframe prior to the World Cup and again during the World Cup.

Writer Matt van Hoven explains the results in his article. Eight of the 18 companies had positive “lift,” while 10 had negative. The results found some trends that could explain the engagement that came from each brand’s efforts. Those with positive lift, like Castrol, had well-timed, brand relevant tweets that truly engaged the fans. For a brand that normally has fewer favorites and retweets than can be counted on two hands, the motor oil company saw an impressive 21,960 percent lift during the World Cup.

If @neymarjr scores against #COL we will give away a signed Brazil shirt! RT & Follow to enter! #WorldCup pic.twitter.com/pNPnueHjjY

Those with negative lift had poorly planned, self-serving tweets that were not overly interesting to true #WorldCup fans. McDonald’s fell in this category.

Digiday’s Brian Morrissey shares some other companies that went too far with the newsjacking during the World Cup in his article. Also, in James Gadea’s article, we’re provided with three tips for harnessing global Twitter trends:

Images via: Digiday and Encore Alert