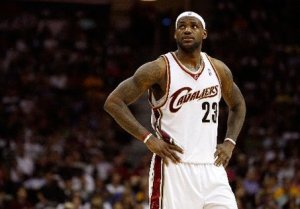 After losing the NBA Finals to the San Antonio Spurs and opting out of the final year of his contract with the Miami Heat, LeBron James was a free agent for the past month and the world was anxious to know what his next move would be. James’ decision was finally revealed in a Sports Illustrated exclusive. He’s chosen to return to the Cleveland Cavaliers, where his career started. Social media, as you can imagine, exploded once the decision was announced.

LeBron James-related tweets continue to rule Twitter. Soon after the announcement, in a single timeframe, James was mentioned in 6,000 more tweets than the World Cup Championship match between Germany and Argentina. There are several hashtags trending such as #BackToCleveland, #TeamCavs and #ImComingHome. At the the same time, Twitter users are also using a number of hashtags criticizing bandwagon Miami Heat fans who are suddenly Cleveland fans again.

Will the Fans welcome James back?

James’ departure from Cleveland four years ago left fans angry and bitter. Many burned his jerseys and Dan Gilbert, owner of the Cleveland Cavaliers, even wrote a bitter open letter to James. But now James has put aside all previous criticisms and says that it was the right choice for him after leaving the Cavaliers the way he did.

“To make the move I needed the support of my wife and my mom, who can be very tough,” James said. “The letter from Dan Gilbert, the booing of the Cleveland fans, the jerseys being burned — seeing all that was hard for them. My emotions were more mixed. It was easy to say, ‘OK, I don’t want to deal with these people ever again.’ But then you think about the other side. What if I were a kid who looked up to an athlete, and that athlete made me want to do better in my own life, and then he left? How would I react?”

James explained that everyone makes mistakes, and he is not one to hold a grudge.  James also mentioned during the exclusive interview with Sports Illustrated that as his family grows he wanted to return home, raise his children and finish his career where he started.

The social media chatter will continue and likely increase as the season draws closer. When I checked on Ice Rocket, a social media measurement tool, the #BacktoCleveland hashtag had 36 mentions a minute, @KingJames was mentioned 900 times in a minute and #LebronJames was mentioned in 42 posts a minute. When all is said and done, social media is one thing and LeBron James is another. He’s his own brand. Clearly the interactions on Twitter showcase just a snapshot of his brand’s strength.