1 is 2 Many: Taking a stand against sexual assault 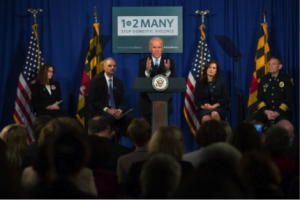 According to the National Institute of Justice, “Nineteen percent of the women reported experiencing a completed or attempted sexual assault since entering college.” What’s even scarier is that 35 percent of those assaults were not reported. Sexual assault is far more frequent than I imagined and I think it needs to be brought into the light. That is the goal of the Obama administration’s 1 is 2 Many campaign.

1 is 2 Many is a public service announcement featuring the president, vice president and male celebrities like Steve Carell, Daniel Craig and Dule Hill. In the PSA they speak about sexual assault and how it is affecting women across the United States. They also explain that sexual assault is when you do not have consent or if the women can’t consent. They recommend that if you see sexual assault happening that you try to stop it or do something about it.

Too many times, the victim is blamed

The White House and Vice President Joe Biden took to Twitter to release the video with the hashtag #1is2Many. Twitter is a great medium for them to broadcast this campaign because that is where they can reach many college students whom they are targeting. The White House is taking a step in the right direction with this PSA and I am excited to see what they have in store for the rest of the campaign. I believe that transparency on this issue will only benefit the situation. If women feel like there are people out there who support them, then maybe they won’t be afraid to report when they are assaulted. Then they won’t be worried that someone says, “She was asking for it.”